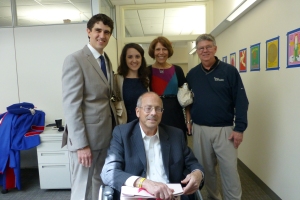 Last night, I lost a man who has been my teacher, mentor, colleague, and friend. Robert Pastor has been an indefatigable force for democracy, human rights, justice, and peace in U.S. policy, in Latin America, the Middle East, and beyond. He has been a tremendous teacher to thousands. His scholarship has influenced many more.

I have had the privilege of working with him for nearly six years. For almost four, he has battled advanced cancer with amazing strength, perseverance, and good humor. He continued to work, accomplishing tremendous things despite his illness. Knowing his time was short, he invested an incredible amount of time and energy in me–in my learning, research, career, and personal development. He was more than my mentor, he was my hero. I miss him terribly.