Rio de Janeiro — This was a historic week in Brazilian politics. The Brazilian Senate voted suspected President Dilma Rousseff definitively out of office by a substantial margin. The interim President Michel Temer took office, briefly, before going abroad for a G20 meeting in China. And though the streets did not fill with enraged multitudes, as they did many times over the last two years, the Brazilian population is deeply divided on how to interpret – and how to speak about – the events that have unfolded over the last several months.

The debate has centered around one word: “golpe” or coup. In most of the political discourse and press, there are two sides to this rhetorical coin. Dilma and her supporters – including, it seems, many in the international Latin American studies community – denounce her ouster as a “coup.” Dilma repeatedly did so in her impassioned, 12-hour defense in the Senate on Monday. She also repeatedly termed Temer “the usurper.” (Dilma picked Temer as vice-president, one of many odd wrinkles.) For those who were glad to see Dilma and her left-of-center Workers Party (PT) go, the word is “constitutional.” In the words of the newspaper Folha de São Paulo the day after the vote, “The process unfolded in strict obedience to the Constitution.” Constitutional or coup: which was it? As I’ll explain below, I don’t this dichotomy illuminates much; furthermore, I think the widespread use of the term “coup” is both an analytical and a political mistake.

First, a very brief summary for anyone who is interested but has not followed the messy and complicated process over the last several years. As a baseline, Brazilian legislative politics are…special. The system is incredibly fragmented, with nearly 30 parties having some level of representation. Many of these parties are hardly parties at all. They are personal or local projects through which politicians take advantage of the country’s obscure campaign finance laws and low barriers for entry to the political game. Only a few of the parties have much in the way of infrastructure, organization, or even a consistent platform or ideology. Even fewer parties have all three of those. This picture makes governing in the Brazilian Congress tricky. In practice, it also leads to a lot of horse-trading and outright corruption.

Everyone basically knew this. However, over the past several years, a bolder and more independent judiciary has brought the size of this corruption to light. It started in part 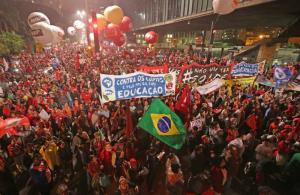 with exposing a system of monthly payments for legislative cooperation called the mensalão. Another investigation called Lava Jato, or Car Wash, exposed an even bigger web of kickbacks, bribes, and money being siphoned from the government and parastatal banks and enterprises. Many of the biggest names in Brazilian politics and industry were implicated; many began to turn on one another, unleashing a two-year stream of revelations, depositions, and surreptitiously taped phone calls. Meanwhile, Brazilian’s decade of impressive economic growth ground to a halt and then went into reverse. The combination produced a wave of indignation.

One person who wasn’t implicated, however, was Dilma Rousseff. While the corruption investigations helped created the climate for her impeachment, she has not been accused of corruption for personal gain. The investigation may have encouraged some of her opponents to push her out, hoping a successor would press judges to back off – two ministers of the interim government were forced to resign after revelations suggesting that was the case. Instead, Dilma was impeached for something much fuzzier: a “crime of responsibility,” which is given as a reason for impeachment in Brazilian law. I am not an

expert on Brazilian law, so I won’t give a definite opinion on the legality of the charges or of Dilma’s guilt or innocence, but it is worth noting that this is a not a clear-cut category and reasonable people disagree about what would constitute such a crime. Dilma’s “crime” was essentially mishandling state accounts in a way that presented a rosier picture before she ran for re-election through a series of misclassified short-term loans. There was certainly a glut of spending before the elections – and I think some very poor macroeconomic and fiscal policy enacted. Previous presidents had played a similar fiscal shell game. Dilma also pulled a bit of a bait and switch, making pre-electoral promises and then changing direction after winning. But that’s closer politics-as-usual than the stuff of impeachment. Regardless of the exact nature of the “crime of responsibility,” few believe that is what led to Dilma’s downfall. Instead, public anger over economic conditions, widespread condemnation of a corrupt political class, and poor management of Brazil’s web of party systems created the climate. For the public, the impeachment was, in many ways, more of a no-confidence vote than a legal case. However, Brazil’s constitution does not provide for no-confidence votes.

There has been a great deal of discussion here about whether the Brazilian Senate had the moral authority to put Dilma on trial. About 60 percent of the body’s members are themselves under investigation for corruption – in many cases much more blatant than Dilma’s wrongdoings. One of the most surreal moments of the past week was watching former president Fernando Collor de Mello, who was impeached for corruption and resigned right before the vote, stand up as a current senator to condemn Dilma and favor impeachment. Many of the machinations that led to the impeachment started shortly after Dilma’s re-election, which Brazil’s center-right party was shocked to lose and never fully accepted. Most of the major media companies in Brazil have been harshly anti-PT over the last few years (some of the post-impeachment editorials have been gleeful). These are the factors that are normally cited in making the argument that the whole messy process is, in fact, a “coup.”

I am not so sure “coup” is the most helpful word, for a few reasons. But before I get into those, it is worth asking why this has been the word of choice. The major reason, I think, is that the term “coup” carries a particular historical resonance in Brazil and elsewhere in the Southern Cone. Until recently, “coup” would have been understood to mean the 1964 military overthrow of democratically elected President João Goulart (side note: U.S. involvement is still hotly debated; for me, the available historic record indicates the effort was Brazilian inspired and led, but that the U.S. anticipated it, welcomed it, signaled that it welcomed it, and made plans to help if called upon). This led to two decades of repressive military government, and it was during this period that today’s PT was formed and former President Lula first came to national attention. Dilma Rousseff herself was a militant against the dictatorship, was captured, and was tortured. So, when Dilma and her supporters call the current process a coup, this is the history they are invoking. In fact, Dilma drew these connections explicitly in her Senate defense. Argentina, Chile, and Uruguay suffered similar military coups and repressive governments (actually, even more violent and repressive than Brazil’s) in the following years, so the word has a similar resonance in South America.

The rhetorical power, then, is strong – at least for a certain audience. However, I think the word “coup” is unhelpful for a few reasons. First, there are definitional and conceptual problems. Second, I think it misuses those historical experiences in ways that risk minimizing how drastic and terrible those periods were. Third, I think the growing use of “coup” in Latin America risks being one-sided in a way that undermines the credibility of the term of those (largely on the left) that are using it. Finally, while the term packs a political-rhetorical punch, I think that is actually obscures issues that are relevant to the Brazilian left now and will be absolutely necessary in its recuperation.

None of this is to say that what happened this week in Brasilia was a a good thing. I don’t find much to celebrate. Turning impeachment into a no-confidence vote, even if following the letter of the law, has potentially destabilizing consequences. Dilma’s government has been replaced by a government no one seems to want, which seems unconcerned about representing Brazil’s diverse society, and which is dogged by corruption issues as serious as the PT’s. No one gives the Brazilian Senate high marks for moral probity, but ultimately it is as irrelevant as it is unpalatable. The source of the Senate’s authority in the process was constitutional, not moral. An impeachment is essentially a political process more than it is a judicial one. There were almost certainly deals made to ensure votes. The question is less about the individuals who occupy these positions, and more about the institutions are in place (and effectively practiced). Those institutions guided a process that many see as deeply flawed. No coup overturned them this week. Crying coup is unlikely to improve them.