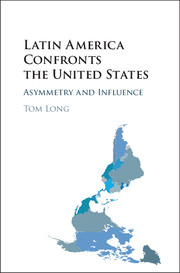 My first book, Latin America Confronts the United States: Asymmetry and Influence is now available for pre-order through Cambridge University Press. It has a cover design, too! The book is due out in November–so why not do your holiday shopping now? (Don’t all families do hard-cover academic book exchanges?)

Here is the summary from Cambridge:

“Latin America Confronts the United States offers a new perspective on US-Latin America relations. Drawing on research in six countries, the book examines how Latin American leaders are able to overcome power asymmetries to influence US foreign policy. The book provides in-depth explorations of key moments in post-World War II inter-American relations – foreign economic policy before the Alliance for Progress, the negotiation of the Panama Canal Treaties, the expansion of trade through NAFTA, and the growth of counternarcotics in Plan Colombia. The new evidence challenges earlier, US-centric explanations of these momentous events. Though differences in power were fundamental to each of these cases, relative weakness did not prevent Latin American leaders from aggressively pursuing their interests vis-à-vis the United States. Drawing on studies of foreign policy and international relations, the book examines how Latin American leaders achieved this influence – and why they sometimes failed.”

Colombia’s Uribe Out of Office, But Not Out of Mind 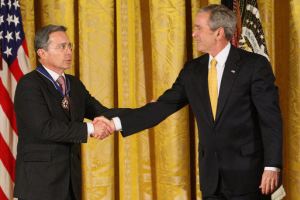 Former Presidents George W. Bush and Álvaro Uribe of Colombia were close allies in the “war on terror,” but they are taking very different approaches to their post-presidency.  While the former has taken up painting and appears at few public events, since leaving office in 2010 Uribe has consistently tried to upstage his hand-picked successor, Juan Manuel Santos.  He has frequently taken to Twitter with biting criticisms, and in recent months – as provincial and municipal elections near – Uribe’s public condemnations have grown both more vociferous and more damaging.  Even ardent supporters of Uribe’s presidency are questioning his post-presidential politicking, according to press reports.

(Read the rest on AULAblog.net)