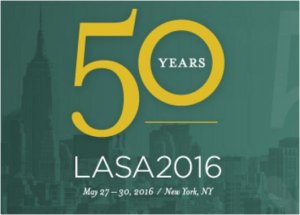 The 2016 Latin American Studies Association conference is right around the corner, and I am looking forward to participating. This year, I will be giving a paper called “The United States and Latin America Decline of power or decline in interest?” on a panel on Sunday at 2:30. The panel, organized by Laura MacDonald of Carleton, is called “The Role of External Actors in Post-Hegemonic Latin America.” My paper (abstract below) sort of starts with asking, “how ‘post-hegemonic’ is the Western Hemisphere?” I am also discussant on a panel Sunday evening on “Contentious political issues in contemporary inter-American affairs: from (non)insurgency to international security and trade policymaking,” which includes my friend and superb young scholar Mariano Bertucci of Tulane.

Abstract: It is commonly asserted that the United States no longer holds the dominant position it once did in Latin America. This decline is credited to several factors: a global decline in U.S. power, lower levels of U.S. attention to the region, the entrance of new extra-hemispheric challengers, and more “assertive” Latin American leaders. This paper seeks to test these claims of U.S. decline. First, using a variety of metrics, it will ask whether U.S. power in the hemisphere has declined relative to regional and extra-regional actors. It assesses recent, frequently cited U.S. struggles to exert influence Latin America—that is, relational power—in comparison to the more distant past. The paper concludes that U.S. decline has too often been assumed instead of demonstrated, that when evidence has been provided it has often been anecdotal, and that this evidence actually demonstrates significant continuities. U.S. decline, both relative to extra-hemispheric powers and in regards to states within the region has been overstated, in part because of a tendency to exaggerate U.S. power in the past, a focus on changes, and an underestimation of the continued depth of U.S. military, economic, structural, and ideational power in the region. There have been real changes in the geographic concentration and nature of U.S. power, as well as in the economic role of China. However, these changes are often outweighed by the continuities of relationships that are still defined by asymmetry.

Truman in Rio: How Brazil, Mexico, and the United States Shaped Regionalism in the Americas

I have just learned that the Harry Truman Library Institute has awarded me a travel and research grant to support archival work at the Truman Presidential Library. My work there will focus on the creation of the inter-American system after World War II. I am particularly interested in debates around democracy, sovereignty/intervention, and international organization. The archives there will complement the work that I am doing in Rio de Janeiro this summer (supported by the British Academy/Leverhulme Trust), work I did last fall in Washington, and archival research done previously in Mexico City while a visiting professor at CIDE. 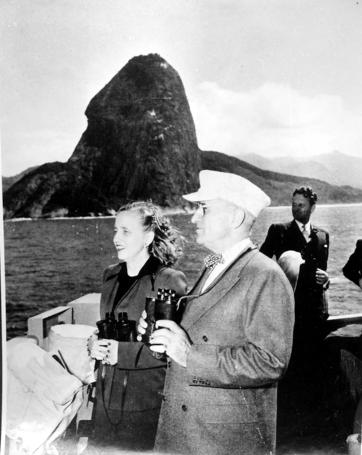 Here are a couple paragraphs from the application that give a sense of the project:

“The creation of the modern inter-American system, particularly the Organization of American States and the Inter-American Treaty of Reciprocal Assistance (Rio Treaty), has usually been explained as an effect of U.S. regional hegemony. On the one hand, this is understandable. The United States, in the closing stages and immediate aftermath of the Second World War, was at the apex of its relative power. In the Western Hemisphere, it had achieved the near-unanimous cooperation of Latin American states with the Allied war effort—with the exception of Argentina. The inter-American system solidified this state of affairs, while also serving to bring the reluctant Argentines into line.

“This project adopts a more multifaceted approach to regionalism. U.S. power and leadership were certainly crucial to the development of the regional system. However, during the creation of the post-war regional institutions, Latin American states—often led by Mexico and Brazil—sought to create a system that provided them an important forum and offered the possibility of greater influence. President Truman recognized those countries’ importance, paying each a visit in 1947, as well as hosting their leaders in Washington.”

The project ties into a couple medium-term article projects, including one with Max Paul Friedman. Eventually, it will all be part of a big book project that looks at Brazilian and Mexican policies toward regionalism and regional organizations over several decades.

A group of more than twenty scholars, many with policy experience, have put together a document offering consensus policy recommendations for the next U.S. president: Recommendations for U.S.-Latin America/Caribbean Policy, 2016 Elections:
Conclusions of Global Americans Working Group.

The effort, ably led by Chris Sabatini, editor of the web magazine Latin America Goes Global, provides an analysis of the current situation in U.S.-Latin American relations. It also offers ideas for how to move forward on security, trade, diplomacy, human rights, the OAS, etc. I am glad to have been involved in this consensus effort, which I think moves the discussion in a positive direction. So far, unfortunately, the campaign’s discussion and portrayal of Latin America and its people has been overwhelmingly negative.

Now is a time for building bridges, not walls, between the United States and its partners and friends in Latin America and the Caribbean. Check out the report here.

The first review of my book (I think) is online at Post-Western World. Oliver Stuenkel pulls out some lessons from the book for Brazil and other countries hoping to influence Washington.

He writes, “Successfully engaging and influencing the United States will be crucial for Latin America in the coming years — be it vis-à-vis designing policies to combat drug trafficking and organized crime, fighting corruption, or articulating a regional response to deal with China’s growing influence. Latin America Confronts the United States offers a very interesting look back about how Latin America has been able to influence its dominant neighbor in the North.” Check out the review.