Within about a ten-day period, I received two very exciting “accept” notices for pieces that I’d been working on for quite a long time. I’m very glad to say that I have two new forthcoming articles, one in World Politics and the other in Foreign Policy Analysis! I’ll explain the two pieces a bit below, but they are quite different. One is connected to a long-term project of historical research. The other emerged as a sort of side project, basically from conversations with Francisco Urdinez while I was in Chile for the Fulbright. That said, it ended up connecting closely with some of my IR theory interests around status, asymmetry, and small states. I’ll update with further publication information and links when that’s available, but here are the citations:

The first article, in World Politics, draws on archival work that I gathered over several years in Brazil, Chile, Colombia, Mexico, and the United States (State Department and Truman Library). It’s part of a big project about the post-WWII period in the Americas, which also produced my recent piece on the Larreta Doctrine in Perspectives on Politics, with Max Paul Friedman. The plan is for this to lead to a book project that would explore creation of regional order- and institution-building, with greater attention to Latin American designs, interests, contributions, and frustrations.

Substantively, the article explores Latin American contributions to emerging security orders in the late 1940s. There’s some classic work on this era’s influence in domestic Latin America politics (e.g., Bethell and Roxborough), but the multinational archival work on foreign relations remains pretty thin. Theoretically, it engages with IR debates about regional variation in postwar orders, connecting to debates on comparative regionalism and the “Why is there no NATO in Asia?” debate launched by Hemmer and Katzenstein nearly fifteen years ago. Methodologically, it employs historical institutionalism’s conceptual tools to offer a more systematic explanation of how “history matters” in the formation of international institutions. This meant really diving into the dynamics and logics of critical junctures, as well as mechanisms for change in historical institutionalism (layering and conversion, especially).

This article has been a long time in the making. Just to give you a sense: I drafted and presented the first, historical component of this article for a December 2016 history seminar at the Latin America Centre at Oxford University. I had a rough version out for comments to colleagues in late summer 2017. The acknowledgements note is like half a page, because I presented earlier versions of this so many places (ISA, LASA, CIDE, PUC, UniAndes, Oxford, UCL). It’s been a long road (with a bit of fairly gut-wrenching rejection along the way), but I also got a lot of support and great feedback that motivated me to work through some issues and aim high with the sharpened version. World Politics! I couldn’t be happier about where it ended up.

The second piece, which was accepted about a week before the World Politics article, emerged during my Fulbright in Chile. Basically, the brilliant Francisco Urdinez told me about a project involving Paraguay-Taiwan relations, and wanted to talk about the literature on small states. One thing led to another, and Francisco being a very generous scholar, this turned into a really fun collaboration, during which I learned a lot. The piece is mixed methods, drawing on a counterfactual model to estimate the opportunity cost paid by Paraguay — Chinese loans, investments, and credits lost as a lack of diplomatic relations. Taiwan’s aid, investment, and market don’t make up the difference. Over various iterations, it became clear that this set up a puzzle — why continue to pay this cost? To explore this, the article draws on interviews and a longitudinal case study.

Our answer is two-fold. Internationally, the Paraguay-Taiwan relationship creates status benefits. Those benefits are asymmetrical, but valued by each side. However, this is status “at the margins” of international society, and it differs in important respects from the types of great-power-centric status that receive the most attention in IR. There’s also an important story about the domestic foundations: elite structures in Paraguay allow for concentration of material and immaterial status benefits, while also shaping a narrow and conservative foreign policy decision-making structure. I got to delve into research about de facto states, recognition and international-legal sovereignty, and small states and status, all of which helped me think through this bilateral relationship in new ways.

The relationship has continued to evolve, even since we sent the piece. What we’ve seen is growing domestic contestation about opportunity costs and the division of benefits, largely among sectors of the Paraguayan economic elite. Taiwan has responded to this (and to the loss of allies elsewhere) with policies quite evidently targeted at minimizing these divisions and underscoring the “status at the margins” that Paraguayans value.

Given the strike, I have time for a few overdue updates on recent work…

In mid-November, I had the opportunity to participate in a conference and workshop at Johns Hopkins University on “Latin America in the liberal international order.” The event was a highlight of my first decade in academia. In part, that’s because it was an amazing group and a day-and-a-half of fascinating discussion. But it was a particular honor to be include because the agenda and call for the conference were explicitly connected to an article that I published a year ago in International Affairs. That article pointed out how minimal discussion of Latin America has been in one of IR’s current obsessions: the origins, development, and crises of “liberal international order.” My point was not just that Latin America’s experience was overlooked, but that it has some very important things to tell us about how international orders develop and relate to areas outside their geopolitical cores.

Last year, @tomlongphd set out an agenda for studying the role of Latin America in the history & future of the “Liberal International Order” – an agenda so exciting, we planned a whole conference around it. Nov 14-15 here at @JHUArtsSciences, co-convened with @AU_CLALS! pic.twitter.com/jYPEIUlG07

The organizing was led by the historian Dr. Christy Thornton of Johns Hopkins and PhD candidate Luis Rodríguez Aquino, along with Eric Hershberg of the American University Center for Latin American and Latino Studies. They put together a great group of scholars from IR, political science, history, and sociology, including people from Argentina, Chile, Mexico, and the United States.

The first night started with an all-star (plus me) panel. I found myself sitting between Daniel Deudney–who perhaps co-coined the term “liberal international order” in 1998 with John Ikenberry–and Margaret Keck, whose work with Kathryn Sikkink reshaped IR’s approach to human rights and transnational activism. Down the row, my mentor and friend, the brilliant and always eloquent Max Paul Friedman,  who followed Voltaire’s quip about the Holy Roman Empire but questioning whether the liberal international order was actually, liberal, international or orderly. Next to Max, Arlene Tickner of Colombia’s Universidad del Rosario, who is one of the most influential voices and advocates for IR scholarship that is inclusive of the Global South and its scholars. And Christy kept things moving with insightful questions.

The panel and the next day’s workshop, where we discussed in depth draft papers covering a range of related topics (see the list here) ranging from democracy to nuclear security to international law. Christy drew on her work on Mexican contributions to the international economic orders–she and I had been thinking along parallel lines. I am working on a paper with Carsten-Andreas Schulz on the history of multilateralism in the Americas during the nineteenth century, particularly regarding the emergence of multipurpose multilateral international organizations. It was a fascinating event, and way more than I expected when describing what I saw as an important gap (and opportunity) in the IR debate on liberal international order.

Having gotten such great feedback, we’re all working on revisions to our initial working papers. Hopefully, I’ll have updates about new research and a special journal issue dedicated to the topic before too long.

Last week CLALS and the Latin America in a Globalizing World initiative at Johns Hopkins University hosted the Latin America in the Liberal International order conference in Baltimore. We would like to thank all the panelists and participants for attending. (1/2) pic.twitter.com/R1kOWYlzMh

I’m currently participating in the UCU strike, which is taking place at Warwick and sixty UK universities over issues of pensions, fair pay, the increased use of staff on short-term and part-time contracts, and pay gaps for women and non-white colleagues. I spent the morning out on my first picket line (in the rain, of course), discussing these concerns with colleagues. 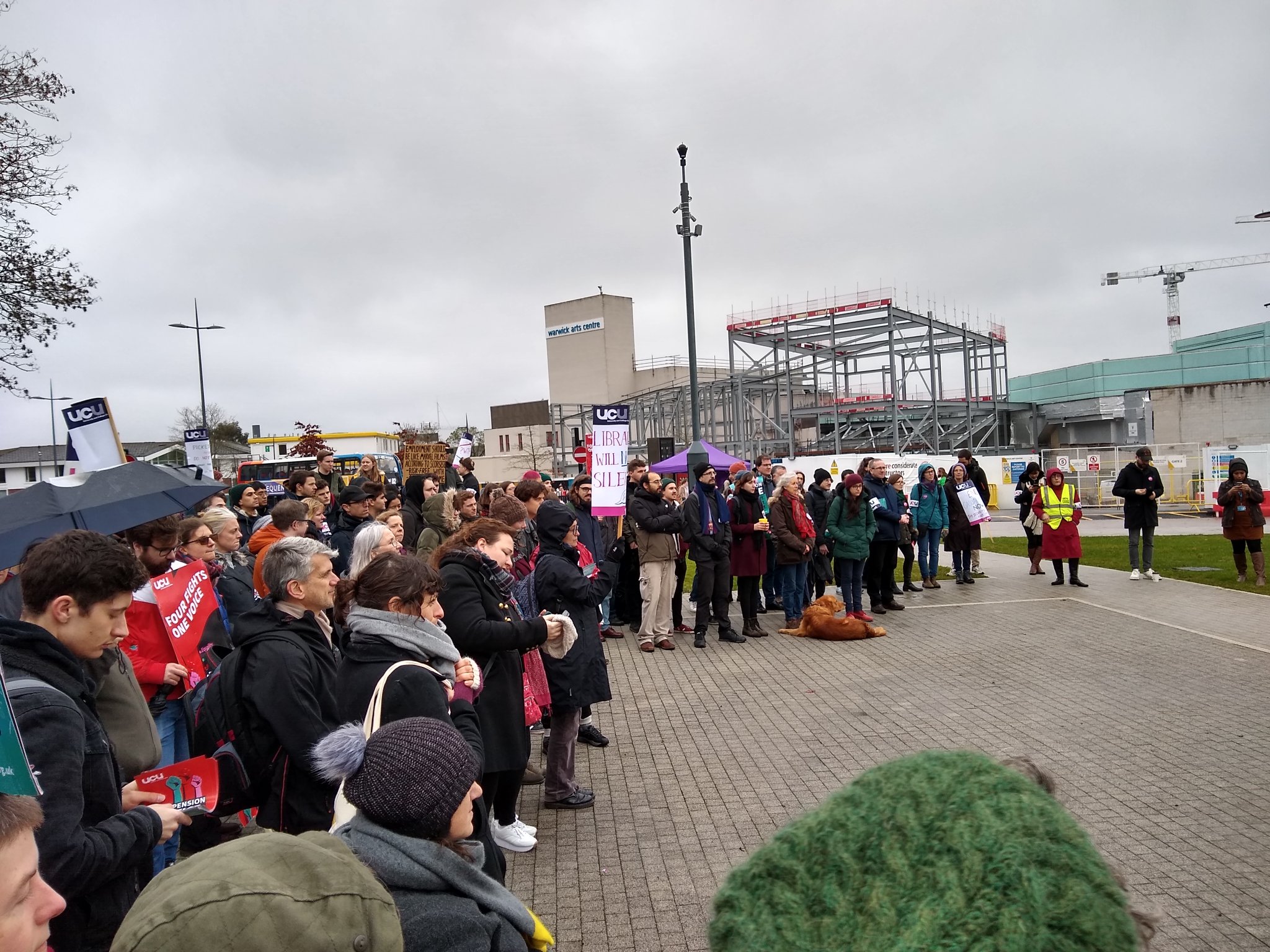 Though not officially on the strike agenda, many of us are also concerned about the massive administrative burdens caused by a slew of metrics (often poorly considered or admittedly flawed), which are used for short-sighted evaluation and the constant, nearly fetishized ranking of universities. Salaries have gone down in real terms even as workloads and student fees have gone up.

It’s really no fun having to go on strike (and not just because of the rain). Of course, we’ll all lose eight days of pay. I certainly didn’t enjoy explaining to students that the term would end early and suddenly; one gets into this line of work because one believes in the value of education, so cancelling classes isn’t a decision taken lightly. We also know that most of us will ending up doing most of the work we miss over the strike days (though the union would rather we didn’t). Much of the work is simply displaced and unpaid. In my case, I worked nights and weekends to get feedback to students before the strike so that could work on their essays. I already have scheduled meetings with supervisees for after the strike, which would have been part of my normal schedule otherwise, but now is being done on what would be research time. As is often the case, research is pushed to nights, weekends, and unused holiday time–even though it makes up much of a our evaluation and promotion cases.  But unfortunately–and despite Warwick’s more progressive position–at the national level, there has been little response from universities to these important issues. All of them have gotten measurably and demonstrably worse over the last decade. So, here we are… 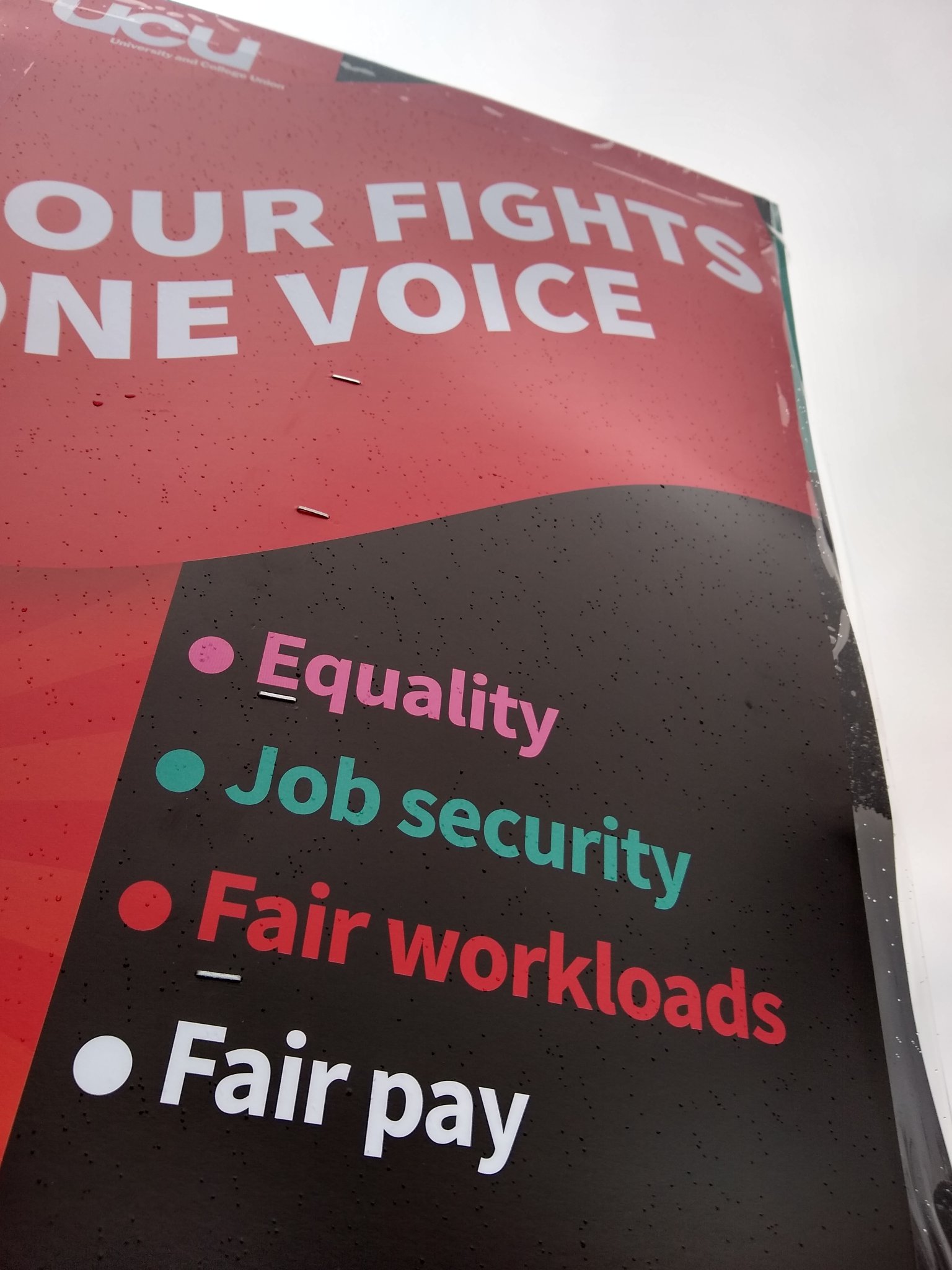 Sebastian Bitar and I have published a new entry on “International Security in Latin America,” for the Oxford Research Encyclopedia of Latin American Politics. The chapter surveys the state of the field relating to Latin American security, including topics such as state security, transnational organized crime, high homicide rates, borders, and more. In the region, “isolated state responses are insufficient to respond to transnational dynamics; although some coordination has been achieved, intergovernmental responses have produced limited gains and substantial unintended consequences.” The piece emerged from collaboration during Seb’s visit as an IAS in 2018; he is an associate professor at Universidad de los Andes, Bogota, Colombia.