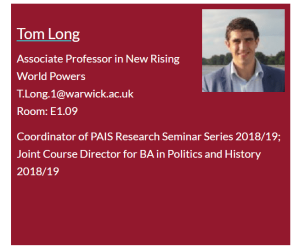 Well, my department has updated my profile, so I guess I can make the good news official! I recently learned (on the 4th of July, in fact) that I’ve been promoted to Associate Professor at the University of Warwick. Time to place an order for new business cards! (The promotion isn’t effective until September 1, so I’ll keep them in the desk drawer for another month and half.)

UK universities don’t have tenure in the same way that most US universities do. That said, some aspects of the process are similar. There’s usually a probationary period. At Warwick, that’s usually five years, though you can apply for promotion earlier. In my case, my previous experience was taken into account, so the expectation when I was hired was that I’d apply for promotion after two years. The process is a bit less harsh than at comparable US universities, I think. A failure to get promotion does not necessarily signal the end of employment (e.g., promotion can be extended). At Warwick, though, it looks a bit like the tenure process, in that coming off probation and getting promoted go together.

Anyhow, it’s been a nice moment to reach out to some of my mentors and colleagues who gave me a lot of support along the way to share the good news. I’ve been incredibly lucky in many respects, but perhaps above all to have benefited from the kindness and support of so many tremendous people.

Next step…I should probably update my university profile picture to one that reflects the gray hair and glasses earned (incurred?) along the way.

My new article with Sebastián Bitar and Gabriel Jiménez Peña is now out in the Bulletin of Latin American Research (currently the no. 1 Latin America area studies journal by Impact Factor). The article emerged from collaboration during a British Council/Newton Fund ResearcherLinks grants, which allowed me to spend time at Universidad de los Andes in Bogotá. Later, Sebastián came to Warwick on an Institute of Advanced Studies grant, allowing us to thoroughly revise the article sitting side by side. Thanks to both for the research support, as well as to the many colleagues who gave us comments on earlier drafts, including at the Latin American Studies Association Congress in Lima.