Article in The National Interest

From the article: “Commentators have largely overlooked the important role Latin American diplomacy played in pushing Washington to change its fifty-six-year-old policy. This is a mistake, because Latin America’s role in influencing U.S.-Cuban relations holds larger implications for how the United States views diplomatic opposition from Latin America and elsewhere. During the last two decades, Latin American states undermined the legitimacy of Washington’s policies, raised their costs and pressured for a new approach. As Kerry noted more diplomatically in his press conference with his Cuban peer, “I thank our friends from around the hemisphere who have urged us—in some cases, for decades—to restore our diplomatic ties and who have warmly welcomed our decision to do so.” Cuba was more than a symbolic issue. The embargo’s unilateralism, and the extraterritoriality with which it was often implemented, damaged Latin Americans’ interests and offended their commitment to the principle of national sovereignty. For the United States, the opening to Cuba improves the U.S. position vis-à-vis rising Chinese influence by creating new investment opportunities and enhancing U.S. prestige. The dramatic policy change, made under Latin American pressure, is the most recent example of how U.S. interests can benefit, paradoxically, from successful opposition by foreign countries pursuing the “soft balancing” of U.S. power.”

Read the rest at The National Interest.

With John Kerry in Havana today, Max Friedman and my op-ed in the Orlando Sentinel argues that this stroke of diplomacy begets wider benefits for the United States in the Western Hemisphere.

On Friday, Secretary of State John Kerry will raise the flag over the U.S. Embassy in Havana. His visit caps the new trend. Diplomacy is back in the Americas. The secret talks that led to the re-establishment of U.S.-Cuban diplomatic relations are just the highest-profile example. For years, Latin American leaders have pressured and cajoled the United States to change its Cold War policy on Cuba. Finally, the Obama administration listened. Having done so better positions the United States in the hemisphere.

Read the rest at the Sentinel.

Soft Balancing in the Americas

Update: The new issue of International Security is now out, and the article is available through the journal. Our article, “Soft Balancing in the Americas,” is still free and ungated for a few weeks.

From the newest issue of International Security, here is my new article with Max Paul Friedman. It is temporarily online free and ungated, courtesy of the Belfer Center.

Sneak peak from our summer issue: @maxpaulfriedman and @tomlongphd's "Soft Balancing in the Americas" http://t.co/iY6jJ2h1Lu.

Abstract:The concept of soft balancing first emerged in analyses of other countries’ attempts to counter U.S. primacy through nonmilitary means after the end of the Cold War. Soft balancing is not a new phenomenon, however. In the early twentieth century, Latin American states sought to end the United States’ frequent interventions in the region by creating international norms against military intervention. 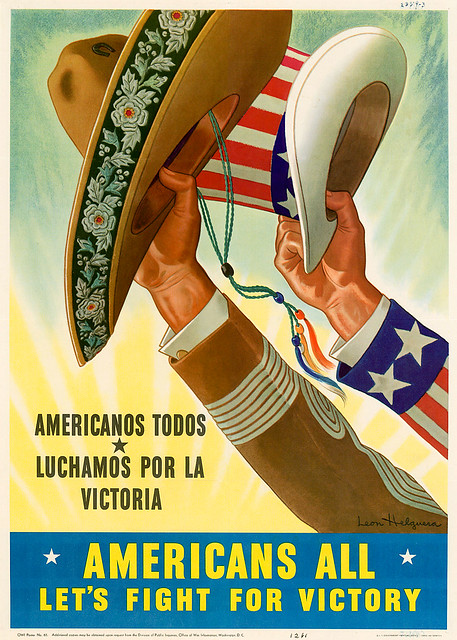 Tom Long and Max Paul Friedman
Originally published in Spanish in Mexico’s El Universal
July 20, 2015
Thanks to El Universal for permission to publish the English original.

The “new” U.S. embassy in Havana, beyond the flagpoles of the Tribuna Anti-imperialista

On Monday, the Cuban flag will be raised above a stately mansion on 16th Street in Washington, D.C. Not long after, Secretary of State John Kerry will travel to Havana to open the U.S. embassy there. These events represent the culmination of a remarkable turn in U.S.-Cuban relations. However, the new, developing U.S.-Cuban relationship is not just a triumph for secret negotiators or a gold star in President Obama’s legacy. The Obama administration dramatically was not only heeding demographic shifts in Florida. It was responding to a decades-long, and ultimately successful, Latin American effort to change U.S. policy.

Cuba was only the latest example where Latin American governments sought to limit the unilateral and arbitrary use of U.S. economic and military power. U.S. policymakers often bristle when their policies face opposition from Latin America. This is unfortunate. When the United States takes its neighbors’ concerns into consideration, the resulting policies are often more beneficial for everyone. END_OF_DOCUMENT_TOKEN_TO_BE_REPLACED

Mezcal: A window into the Mexican spirit

Out now on the blog War on the Rocks:

It is too early to be in Plaza Garibaldi, located in the heart of Mexico D.F., Mexico’s sprawling capital. The sun is just beginning to set on a Tuesday, so mariachis and revelers only dot the plaza, instead of packing it with colorful characters like a page from “Where’s Waldo.” Instead of the weekend din of a hundred simultaneous ballads, the chords of lonely guitars and the verses of solitary crooners drift upwards to the terrace bar of the Museum of Tequila and Mezcal (MUTEM), where I take in the scene. Men in ornate charro outfits try to sell serenades to passersby. Jarocho duos in white suits carry harps and hope for a gig.

A display case at the Museum of Tequila and Mezcal in Mexico City.

The scene is unmistakably Mexican. In one corner of the storied plaza is the Salón Tenampa, a bar that has for nearly a century served as a mariachi mecca. It is the anchor of Plaza Garibaldi and the surrounding multitude of cantinas, which range from touristy to seedy. In fact, it is much more than just another cantina —Tenampa was a destination. Following a larger Mexican social pattern of urbanization and northward migration that stretched from the country’s southwest coast to Los Angeles, mariachi music moved from the countryside of Jalisco to the north of Mexico at the turn of the 20th century. Both Tenampa and the music it helped popularize are awash in another most Mexican of traditions — tequila, and its less internationally recognized cousin, mezcal.

Read the rest over at War on the Rocks!

On December 15, 2014, I presented a paper in Havana at a “series of conversations” on U.S.-Cuban relations. That paper looked at the role of Panama, host of the April 2015 Summit of the Americas, as a potential facilitator of U.S.-Cuban dialogue. If I had subbed in Canada or the Vatican for Panama, I would have looked much smarter two days later when, to our surprise, Presidents Obama and Castro announced a prisoner exchange and move to re-establish relations.

Homero Campa, whose interesting book on the role of Mexico as a sometimes interlocutor between the U.S. and Cuba came out in 2014, might feel similarly unlucky. As it turned out, despite their historic role between the United States and Cuba, Mexican diplomats had no hand in last year’s secret negotiations, which led to today’s big announcement of the opening on embassies in Havana and Washington. Read differently, Campa’s book is a bit more prescient than my paper (though trust me, I can suggest a more prescient reading of my paper, if you’d like!). Mexico’s lack of involvement—and by all accounts, Mexicans were surprised by the announcements—fits with the larger pattern of its declining role as a broker between the United States and Cuba. END_OF_DOCUMENT_TOKEN_TO_BE_REPLACED

My first book, Latin America Confronts the United States: Asymmetry and Influence is now available for pre-order through Cambridge University Press. It has a cover design, too! The book is due out in November–so why not do your holiday shopping now? (Don’t all families do hard-cover academic book exchanges?)

Here is the summary from Cambridge:

“Latin America Confronts the United States offers a new perspective on US-Latin America relations. Drawing on research in six countries, the book examines how Latin American leaders are able to overcome power asymmetries to influence US foreign policy. The book provides in-depth explorations of key moments in post-World War II inter-American relations – foreign economic policy before the Alliance for Progress, the negotiation of the Panama Canal Treaties, the expansion of trade through NAFTA, and the growth of counternarcotics in Plan Colombia. The new evidence challenges earlier, US-centric explanations of these momentous events. Though differences in power were fundamental to each of these cases, relative weakness did not prevent Latin American leaders from aggressively pursuing their interests vis-à-vis the United States. Drawing on studies of foreign policy and international relations, the book examines how Latin American leaders achieved this influence – and why they sometimes failed.”

What I’m reading: The War That Ended Peace by Margaret MacMillan

My reading list is a year behind in marking the centennial the First World War’s onset, which occasioned an outpouring of new and reissued histories. (Now many of those books are available in paperback, so a year behind isn’t so bad.) I had read MacMillan’s impressive Paris 1919. My appreciation for that book led me to grab The War That Ended Peace of a bookshelf lined with World War I-themed competitors.

Paris 1919 tells the story of the peace conference that had such a dramatic impact on questions of nationalism, territory, reparations, and international organization that continue to haunt us today. The lessons of 1919 felt current without having to be explicitly stated, in that they contextualized later and contemporary developments. It brought its major figures to life, with vivid portraits of Woodrow Wilson, Lloyd George, George Clemenceau, and others. The book admirably showed how factors from different “levels of analysis” affected decision-makers, and how those mixed with personal conflicts, boredom, and exhaustion. END_OF_DOCUMENT_TOKEN_TO_BE_REPLACED

Bridging the Gap: Reflections on IPSI 2015 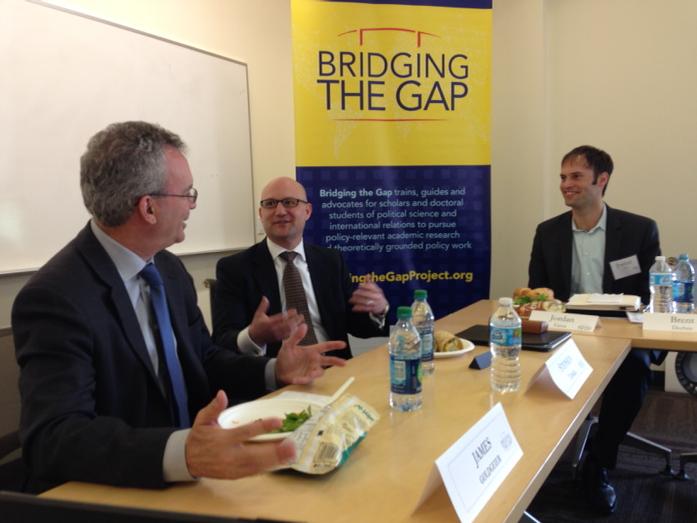